Editing from the past

First the system stats:
It is a custom build system that back in the day it was nice. 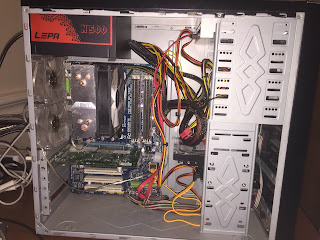 Why would I try this with such old hardware? I mean seriously, not even an SSD! It is simple, I had this hardware laying around and I spent $10 on this update. It was on the wifi adapter.
I know, even back in 2008 when the system was build the first time, the parts total was around $500.
In fact the only thing that are not from the original system is the hard drive, the monster heat sink, and the power supply. Time killed all the original ones.

Another reason to do it, because I can. It is an overly old system and it does show a few signs of wear and tear, but it should be a good start for some ghetto video editing and time wasting, youtube anyone?

So far the experience has been, it is slow. It crashes every once and a while, but it does work, and it does edit videos. 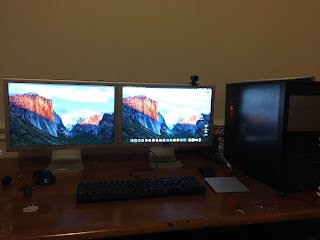 Did I mention that it is running El Capitan? Yes fellow readers, this is a hackintosh, in a pretty true sense of the word. There was some issues, the audio was a bit difficult to configure, but after that was done everything else "just worked"

The system spec for it is an Macmini 5,1 (2011 Mac Mini) and the audio problem was handled by using Clover bootloader, and forcing it to load the kext on boot.
Audio Issue:
To solve the audio issue, I mounted the clover partition, then added the AppleHDA.kext directly to the EFI/CLOVER/kext/10.11 folder.
After that, everything worked.
For wi-fi I am using the TP-Link Wifi Adapter, it was cheap and it connects to the internet.

As an added bonus, it takes 5 minutes to render a 2 minute video. Overall though, I don't think it is a bad little system for general use.
Posted by Hifi Ghetto at 6:53 PM No comments: